John and Janie worked in Cranmers Opticians, later known as Cranmer and Askew, until 1960 when they set up their own business John Askew Opticians, with branches in Wellington and Minehead.

Janie never had the little girl she so desperately longed for but a second son, Paul Russell, was born in 1947. Both boys went to Taunton School as John and Janie had planned and both trained in optics, joining their parents in the business, Anthony as an ophthalmic optician in 1963 and Paul as a dispensing optician in 1968.

The family moved from the rented house in King George Road in 1956 to a bungalow the had built on North Hill in Minehead, the dream home John and Janie had always talked about.

John was extremely successful: a popular family optician, with a flourishing business, he was Chairman of the local branch of the Association of Optical Practitioners and then National President; he worked hard wit the NHS and the government to further the optical profession and was awarded the OBE in 1988 for his services to the profession. Despite ill health, he never retired and was still working three days a week right up to the day he died in 1997.

Janie continued working in the practice she helped John build up until ill health finally forced her to retire. Although she survived him by five years she never recovered from John’s death and mourned him until the day she died, a contented smile on her lips, happy that she was going to see her Johnnie again. 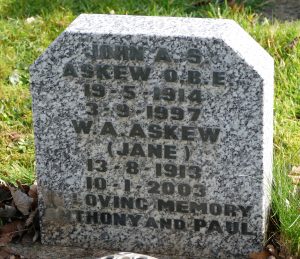 “Together again” John and Janie’s grave in Minehead Cemetery