We take on a large number of passengers. See the movie “Cover Girl” in the cinema. 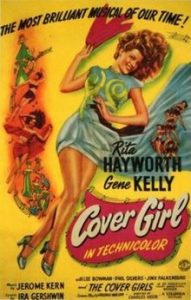 Cover Girl is a 1944 American Technicolor musical film starring Rita Hayworth and Gene Kelly. The film tells the story of a chorus girl given a chance at stardom when she is offered an opportunity to be a highly paid cover girl. The film was directed by Charles Vidor and was one of the most popular musicals of the war years.